FREE SHIPPING AND TRIALS ON ALL SADDLES

Thaisa was born in Scotland and grew up in a small country town in Australia. Her passion for horses and showjumping grew from an early age. She completed her degree in environmental engineering whilst competing and winning at World Cup level. After qualifying for the Athens Olympics on The Countryman, a horse she trained since it was a 4 yo, Thaisa ventured to Europe in pursuit of her passion for showjumping. There she furthered her showjumping and training skills under Peter and Helena Weinberg and Eric van der Vleuten. Her time in Europe also saw Thaisa develop the strong network and connections she has access to today which are paramount in sourcing horses of all levels.

Since her move to the Eastern USA 11 years ago, Thaisa has run a successful training, coaching and sales business in Middleburg, Virginia. During this time she has produced horses from young horses to Grand Prix level and successfully represented Australia in Nations Cups and World Cup events.

We are excited to announce our newest sponsored rider, Winn Alden. With so many wins at all the big shows in the hunters and jumpers, she is a true legend. Winn has also been a big part of my riding life, all the way back to the pony days. So I’m very happy to say, welcome to#TeamHLTA, Winn!!

We are delighted to announce our next Sponsored Rider, Shannon Sullivan. Shannon is based out of Downtown Equestrian Center, just outside of Chicago. As a Junior, Shannon worked at Helen Varble’s Wellington Show Stables in Wellington. During this time, Shannon worked with some of the top names on the Grand Prix circuit.

She now owns and is head trainer at Downtown Equestrian Center and regularly competes at the new Hits Chicago at Balmoral Park. She has already earned top ribbons there, including a win in the $1000 1.20m FarmVet Jumper class. Shannon has won multiple level four, modified championships and high jump puissance classes at USEF AA rated competitions, in addition to her most recent 1.30 Grand Prix Series win at Lamplight Equestrian Center.

Highline Tack is pleased to announce our first international partnership with rider Kate Gluckman. Kate is a diplomat currently serving in Monterrey, Mexico. Her mobile lifestyle has not stood in the way of her equestrian goals. Kate competes in the Medium Amateur Jumpers across Mexico, where she has placed at the state, national, and international level (CSI2*, CSI3*). Kate is a lifelong rider who got her start in Florida’s AA circuit in Ocala and Wellington. As a junior, Kate excelled in the equitation ring, earning accolades in USET, USEF medal, Maclay and Marshall and Sterling classes. While working in Washington, D.C., Kate moved into the hunter ring, earning champion and reserve champion honors in 2012-2014 in Maryland.

Kate graduated from Harvard University with a bachelor in Government and French. She also has a dual degree Master from Sciences Po Paris and Columbia University in International Security Policy. As both an undergraduate and graduate student, Kate rode on behalf of her school’s IHSA teams. And while in France, she rode at the Ecole Militaire Paris. She is fluent in French and Spanish. Kate will be relocating from Mexico to Buenos Aires, Argentina next summer. We look forward to following her around the globe!

Our second sponsored rider is Molly DiNapoli out of Infinitty Farm in Ocala, Florida.

Molly began riding at the age of 3 and her love for horses has never slowed down. She was competing in the AA rated  junior hunter and jumper divisions by the age of 12 and soon after began the Big Eq and Grand Prix classes. Through out her junior career she has worked with trainers all over the country including Don Stewart, Bibby Hill, Darragh Kenny, Aaron Vale, Michael Dowling and Dianne Hatt. She has won on numerous occasions in the Big Eq classes such as the USET, Maclay, USEF medal, and WHIS medal qualifying for finals every year. Not only were her goals met in the Equitation, but in the hunters and jumpers as well. She has taken home top 10 placings at all National finals including Devon, Harrisburg and Jr hunter finals to name a few on various horses in the Junior Hunters And Equitation as well as multiple international derbies on horses such as Rio Mio, Tahitian Gold and Ne-Yo.  Molly has also earned multiple tri colors from the nations most prestigious horse shows in both the Junior and Professional classes as a young rider. She also developed a love for training and competing horses that are sometimes written off as “problems.” At 14 years old Molly took a previous grand prix horse that had been deemed never to jump again after a hard fall that had left him extremely nervous. Despite the suggestions, she turned him into a top international derby and High performance working hunter in just a few months.

Molly has many recent achievements including ribboning at Devon in the High Performance Hunters, a win in the International Hunter Derby in Pensacola, a few Welcome Stake wins and top 2 placings in the 1.30m and 1.40m jumpers.

We are very excited to announce our first sponsored rider – Lauren Hill at Seaborne Farm.

Lauren’s desire to ride horses began at a young age growing up on her family’s Connemara breeding farm. She went on to compete some of the breeding operations foundation ponies extensively in the hunter ring. As an active member of the United States Pony Club she earned her C-2 rating and attended Show Jumping, Dressage, Tetrathelon, and Combined Training Rallies. She has trained with notables such as Canadian Olympian Harold Chopping, South African Olympian Mark Stopford, top equitation rider and r Hunter Judge Jennifer Johnston, French Canadian Olympian Gilles Casavant, R Hunter Judge George Wallace, R Hunter Judge and IHSA Coach Thom Pollard, Dr. Melyni Worth (Ph. D., P.A.S., BASAI Britain, Equine Nutrition), and 3-Day Eventer Laura Patterson.
During her junior and amateur career she successfully competed at the “C” and “A” show levels where she earned many year end high point awards and equitation final titles. In 1999 she was the NCHJA “C” Children’s Hunter and Equitation Age group 15-17 Year End Champion and the winner of the Triangle Farms Equitation Cup Finals. In 2000 she continued her success with the NCHJA “A” Adult Amateur Hunter 18-35 Year End Champion award, was named HITS Culpeper two-time Best Amateur Rider and Circuit Reserve Champion, and was a Marshall and Sterling League Adult Hunter Classic National Qualifier.  In 2003 she went on to win the Brian Jones Adult Equitation Medal Finals with farm stallion Seaborne’s Schooner as well as earning high score awards with the American Sport Pony Registry and the American Connemara Pony Society.
Lauren graduated from North Carolina State University in 2007 with degrees in Agribusiness Management and Livestock Management. While attending, she held executive positions with the NCSU equestrian team as sponsor chair and president. During her time riding for the team she earned Intercollegiate Horse Show Association Reserve High Point Open Level Equitation Rider in 2003-2004 and 2006-2007.  In 2006-2007 she was an Intercollegiate Horse Show Association Open Level Equitation National Qualifier finishing as one of the top eighteen intercollegiate riders in the nation.
In the 2012-2013 show season Lauren qualified and competed her horse Fuerst Felicity in the International Hunter Derby Championships in Lexington, KY.
Lauren has been featured in Equus Magazine and Pony Enthusiast Magazine with Seaborne Farms stallion Seaborne’s Schooner in which the two were described as an “outstanding sport pony and rider pair” as well as featured in Hunter and Sport Magazine in an article titled “Finesse Over Fences” in which she was pictured as an example of a polished amateur rider. Most notably Lauren appeared in Practical Horseman in a George Morris photo critique titled “Four Nicely Done Releases” in which he referred to her as a “stylist”. 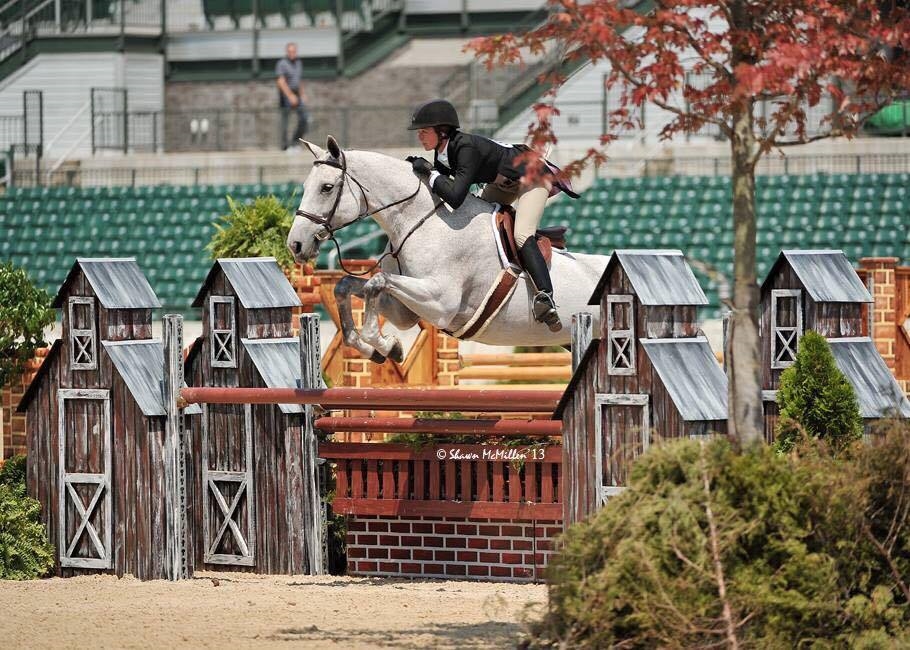